A reflection on *Being*

Based on Robert Sweetman's essay in Radical Orthodoxy and the Reformed T radition.  His larger target is the claim that nominalism created the Reformation (and hence ruined Christian Europe).  I think he ably rebuts that thesis, but his essay does a good job in showing what the analogia entis really is.


“Being” covers the most humble individual to the most general genera.  Being functions as a genus, but it is not a genus itself.  It does not have anything more universal in which it can participate.  Because being is not definable, it is not univocal.

Because we have to predicate “being” over everything, this points to some sameness between everything.  And because there is a sameness, being cannot be equivocal.  Thus, it is analogical.

Analogy is founded on the proportionality of one name to another where they participate in a common  unity.  The predicate of a term of both God and man is founded on some order of all creatures.  In short, analogical predication posits a single essence as a middle term uniting God and creature (Sweetman 83).  The dissimilarity is that the creature has a derived and diminished existence.
Posted by J. B. Aitken at 5:53 PM No comments:

Outline of Desire of the Nations

Rev David Field did his own outline.  You are encouraged to go read his.


The Revelation of God’s Kingship (36-41)
Isaiah 33:22:   Yhwh is our king; Yhwh is our judge; Yhwh is our lawgiver.  He will save us.”
Ideas are connected.  Kingship implies judgment, lawgiving, and salvation.


Salvation
The early Hebrews saw this element in the Psalms.   While it included salvation from sin, the term is often used to show God’s victories of his people’s enemies.
What is the purpose of these victories? (Ps. 13:5; 85:7).   They show God’s hesed, his enduring commitment to those in his covenant.  Hesed often stands in parallel to the Hebrew word for faithfulness (Psalm 98.3).


These victories also show God’s tsedeq, righteousness.  In the Psalms God’s righteousness is a public thing.   When he shows his right hand and holy arm, the nations will know (98.2). This is an important point in later Israelite history.   You are an Israelite living in Babylon.   While you are the chosen people of God, you have been publicly shamed by a pagan power (and presumably, so has your God).  Therefore, when God acts to show his righteousness, it must be public:  Is. 45.5; 46.13;51.5-8;56.1;61.10; 62.1).


Judgment
The Hebrew root words relating to God’s righteousness often appear in connection with his shpt, judgment.
This illustrates the problem with ancient Israel’s existence.  They were God’s chosen people yet they often worshipped idols.  If it is true that God vindicates his name among the pagans because he is a just God, how much more true will he vindicate his name among his people?


What do we mean by the words “judgment” and “justice?”  The Hebrew word for “judgment” is mishpat.  When it is used in the Bible it is seen as a judicial performance.  When true “judgment” is present it is not a state of affairs but an activity that is carried out.
The prophet Amos calls for mishpat to roll on like a river.  Isaiah says that the citizens of Jerusalem should seek mishpat by giving judgment in the cause of the fatherless and widow (1:17).  Isaiah even goes on to say that Zion will even be redeemed by mishpat (1:26ff).


This leads into what the Israelites believed about…


Law
If you look at the Old Testament law code, it is strange.   But maybe it shouldn’t be.   For us Westerners there is a sharp distinction between history and law.    This was not so for the Hebrew.  For Israel “history” is the telling of God’s acts to future generations.  Law was the telling of his judgments (mishpatim).
Psalm 119 is a case in point.  There are several terms of importance.   Testimony and decree. Interestingly enough, other Psalmists use the words in connection with a word we have just seen:  judgment.  See Psalm 81:4-5.


When the kingdom of Judah had its reforming moments, it is evident that “testimony” and “law” were in the foreground.  2 Kgs 22:8-13.  Jer. 26:1ff.  In both cases we see that “law” is simply more than a “code.”  It is attesting that God will live out his judgments in Israel’s history.


Look at how Psalm 96:10 unfolds:  the nations are to be told that Yhwh is king, that he established the world on firm foundations, and that he will judge the peoples with equity.


Without the consciousness of something possessed and handed on, there could never be a political theology, since it could never be clear how the judgments of God could give order and sustain a community (48ff).


In other words, something needs to be possessed and handed down.  This traditional possession was not always identified with “The Law.”  Originally, the existence of Israel was mediated through the Land.  Possessing the land was a matter of observing the order of life which was established by Yahweh’s judgments (Psalm 37:29ff).


Yahweh’s authority is image-less, like Yahweh himself.   However, Yahweh is immediately present in conquest, judgment, and law.  Israel still had a problem in its history:  it could never consolidate.  It had land, judgment, and victories (though never absolutely), but it had no stable means of passing it down.  Even acknowledging the sacred writer’s criticism of monarchy (1 Sam. 8), it must be acknowledged that monarchy exercised a stabilizing influence when contrasted with the Judges period.  Most importantly, monarchy allowed the passing down of the tradition (Land, Judgments, Victories).


Dual Authority
Two cities; two rules.  Israel and Babylon side by side.
The foreign sword, exile gives Israel a chance to separate from idolatrous connections (84).
Empire is necessarily unstable
The fulfilling of time
Jesus’s words of God’s reign were confirmed by power.  The point: instruction runs parallel to authority (Mark 1:22, 27: Luke:  4:36).
The previous duality is transformed: The Two Cities (Babylon/Jerusalem) were indicative of Israel’s alienation.  They were soon to be replaced by the Two Eras (93).  Israel previously owed its existence (30-49) through Yahweh’s victories, Judgments, and gift of Land.  This is transformed in Jesus’s ministry
Triumph of the Kingdom pp. 120-157


The Representative (120)
Jesus proclaimed Kingdom; apostolic church did not.  This is no accident.  The latter proclaimed/illustrated what happens when the Kingdom came in conflict with principalities.
Progressive mediations: “God’s rule was discerned through the judicial tasks of angels and kings in all the nations; it was discerned in special covenant through the vocation of the Davidide line.   But now the last layer of the veil is drawn back”(124).
In Ezekiel we see the immediate disclosure of Yahweh’s rule in the Davidic line (Ez. 34:1-31).


Representation and Authority:  our life under Christ’s resurrection is service to righteousness (129).  Resurrection establishes authority of new life (NB: Note the important connection between resurrection and reigning).


Moments of the Representative Act (133)


Subjection of the Nations
To what extent is secular authority compatible with the Christ-mission?
Romans 13:1ff; government’s purpose is judgment.  To this degree is secular authority compatible with the Christ-mission:  it has the role of judgment.  Mishpt.  This reflects the New Christian situation.
Secular authorities do not mediate the rule of God (rule = judgment, victory, law); they merely mediate his judgment (151).  Their victories and such are rendered irrelevant by Christ’s victory.


The church has no distinct social presence:  its witnesses call back to the Holy City.  Interestingly in Revelation 18ff we see a converging of Israel, the Eschatological Church, and the Antichrist Empire.


The Authorisation of the Church
The dual authority assumes a distinct form. OO is somewhat confusing on this identity.  He says he isn’t defending Christendom, but its hard to see otherwise.

The Christ-event is the structuring principle for all ecclesiology.


Our narrative of the church is the inner logic of the sequence of the kingdom of God (191).


The Obedience of Rulers

Christendom: The Doctrine of the Two


OO:  society and rulers have different destinies:  the former is to be transformed, shaped in conformity to God’s purpose; the latter to disappear, renouncing their sovereignty in the face of his (193).  Nice statement, but Revelation speaks of kings being healed by the New Jerusalem.


Contrary to critics, OO is not advocating Christendom.  He is merely noting it is a historical response to Christ’s witness (195).


OO offers good reading of Constantine and the interpretations that followed.  Per Eusebius, Constantine filled the place of the Parousia (which seems to echo Moltmann’s contention that the church ceased being premillennial because it became Constantinian).

Church contrasted the roles of emperor and bishop as a transition from old age to new (199). This is best exemplified in Ambrose of Milan.

Two Rules
Gelasius deconstructed Augustine:  he translated the duality from the level of society (two loves made two cities) to the level of government (two there are by whom this world is ruled; 203).


Problem arose: who inherited the kingly aspect of Christ’s ministry, emperor or bishop?


Marsilius of Padua offered a good, even eschatological perspective:  since Christ’s judgment is still future, it is impossible to represent it now by any single icon of political government (208).


Antichrist: the convergence in one subject of claims to earthly political rule and heavenly soteriological mediation (214ff).


Martyrdom is the witness of an alternative Lord.


OO is at pains to say that a Christian state need not be a coercive state.  Logically, he is correct.


Christendom and the Liberal Tradition
OO gently rebuts Chesterton’s Catholic neo-Medievalism.  OO notes that the sources of modernity lie within the Christendom tradition and not simply Protestantism (228).


medieval economics: A Christo-centric ethic of perfection that drew heavily upon the Stoic-Platonist tradition.

Canonical Development of the Usury Prohibition

The church recognized two intrinsic titles to interest (indemnity) on loans in the case of delayed repayment:  the title of damages sustained and that of profit foregone.  Further, contracts are distinguished from loans.

The church in fact gave moral license to limited opportunities for investment and credit that favored the welfare of the poor but did not serve an expanding commercial economy (101-102).  However, as contracts became more complex over time, it was really hard to not engage in some form of usury.

The Earlier Medieval Treatments of Usury

God’s original will for human community:

Roman contract of loan (mutuum):  a fungible good is transferred from owner to borrower. Ownership is transferred because the borrower is not expected to repay the exact same item.  The borrower assumes the risk of loss and is bound to repay it.  Thefore, Lockwood O’Donovan argues, “The medieval theologians and canonists could argue, in the first place, that the usurer charges the debtor for what the debtor already owns” (107).

The Thomistic Treatment of Usury 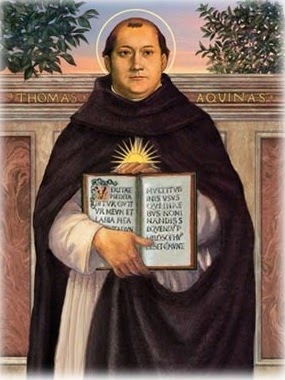 Commutative justice (ST 2a2ae. 78)
Usury sins against justice in the exchange, a violation against equality in the exchange
Thomas does presuppose property right


Luther’s restatement of the medieval inheritance

law of natural equity: we do not seek our profit in our neighbor’s loss.

Outline from Bonds of Imperfection eds O'Donovan and O'Donovan (Eerdmans).

The Proprietary Subject and the Crisis of Liberal Rights

Key point:  The possession of rights is always proprietorship; all natural rights (for the West) originate in property rights (Joan Lockwood O'Donovan, 75).   This originated with Pope John XXIII (1329 AD).  He saw man as created with full lordship and ownership as possession (dominum).  His point was to discredit Fransiscan theologians who insisted on radical poverty. 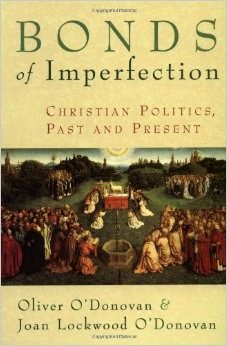 This is the rights culture that would spring full-bloom in the modern world.  The problem it created was how to have community if the above take on rights is true.

Augustine distinguished between two objective rights:  (a) divine right, by which all things belong to the righteous, and (b) human right, in which is the jurisdiction of earthly kings (79, quoting Epistle 93).

It is the regulated interaction of private spheres of degenerate freedom, secured by the protection of property and enhanced by the provision of material benefits at the hands of unscrupulous tyrants (80).